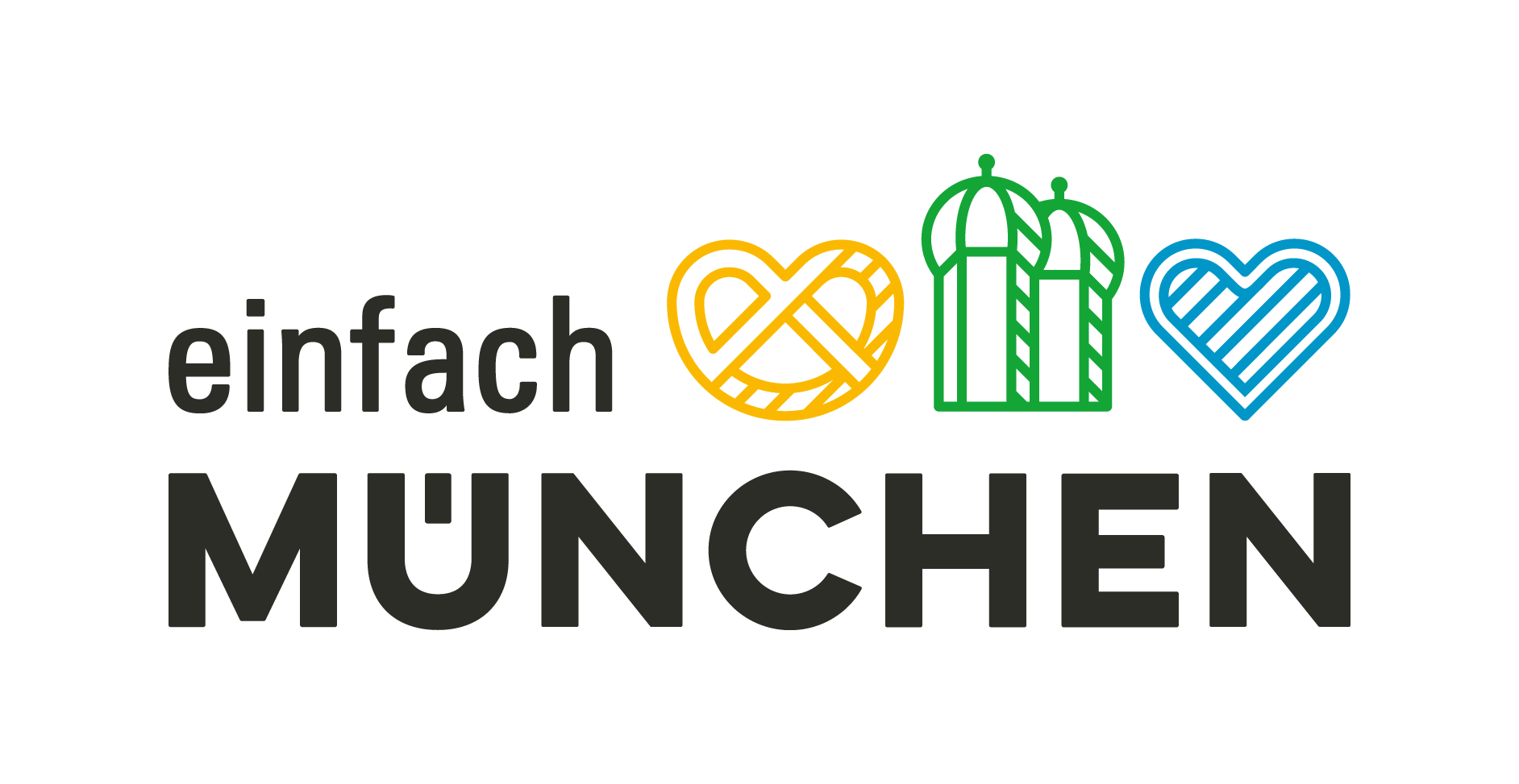 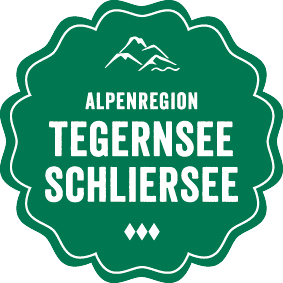 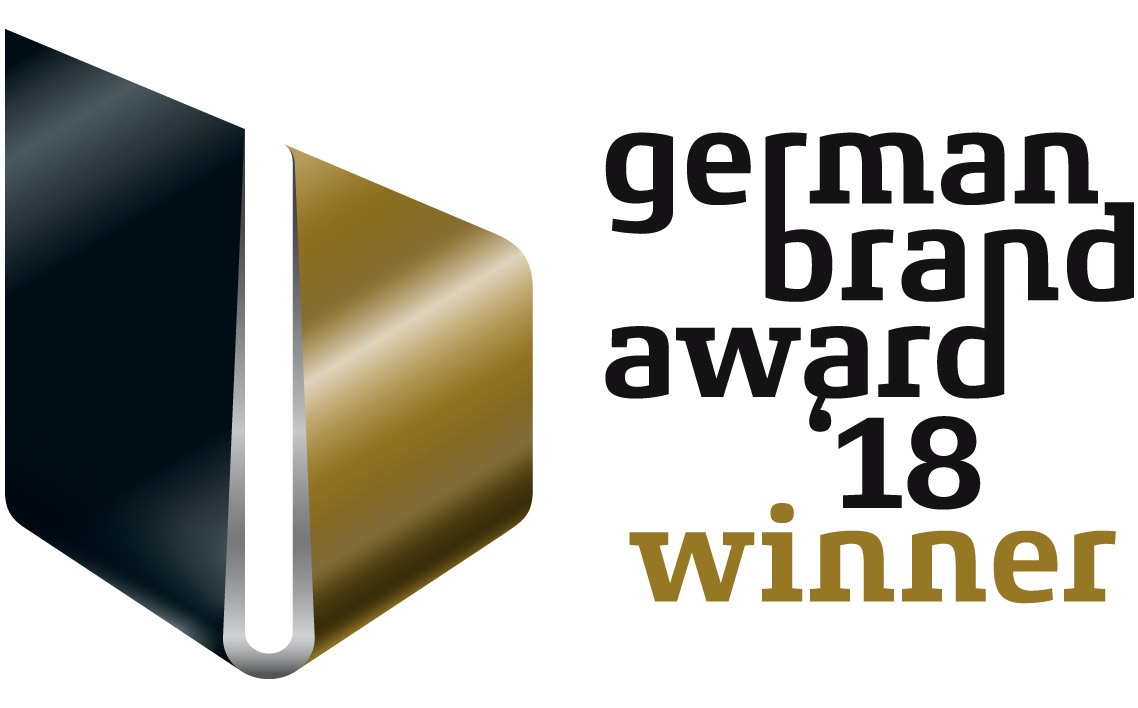 The German Futures, one of the biggest international youth and U21 tournaments in Germany, took place for the second time in the Golf Club München-Valley. Nearly 160 participants from 12 nations played for the victory in their age groups. Following the successful premiere last year, the Golf Valley facility once again hosted the German Futures – after 130 talents from 16 nations in 2017, this year almost 160 participants from 12 nations competed for the title.

The respective overall victory of the 3-day and 54-hole WAGR (World Amateur Golf Ranking) tournament was secured by a score of -1 from Sweden's Sara Ericsson. In the men’s competition with a score of -6 Sander Akeren from Norway won the title. Both won the title in their respective age group U18, too.

Among the 156 girls and boys, 11 players of the Golf Club Valley fought for the title in their age group. German women's international Sarina Schmidt won the women U21 title, Lilian Klug won silver in the women’s U18, Johannes Hounsgaard won the title in the men’s U21 and Carlos Kuchenmeister secured bronze in the age group U14. Other participants from Valley were Paula Bauer, Lisa Marie Gillen, Charline Kuchenmeister, Marius Fischer, Niclas Gimmy, Nico Horder, Lorenzo Laböck and Konstantin Kuchenmeister.

Headcoach and tournament director Danny Wilde was delighted with the players' achievements, noting that "much more will happen in Valley over the next few years". "I think it's important that this tournament format is increasingly used in the youth field and that competition practice is always the highest form of training. So it's great to have such a platform," he says.

The course was originally built for the 2018 Ryder Cup, which is now taking place in late September in Paris. Many athletes had never played on such a long tour-level course before. Green speed up to 12 Stimp set an even higher standard.

On the first two days, the course presented itself from its most pleasant side with plenty of sunshine and breathtaking views of the Alpine landscape, which spurred on athletic excellence. On day 3, the final day, the conditions became visibly more demanding. Rain and wind let the place show its difficulties.

Despite these adverse conditions, the 156 participants from 12 nations had great fun. The entertainment program (Bavarian BBQ in costume at the Player’s Night, Hit the Boat, Longest Drive, floodlight driving range and much more) was described by the players as "unforgettable", "simply great" and "so much fun" and produced more positive moments.

Players who have participated in the tournament for the second time said, "Valley is just cool!" and "even better than last year". Thanks to the great sponsors (Allianz Helmut Bauer, Hotel Konrad Pötzel, CBO, Mastertent, Autohaus Bader Mainzl, Endress Bayern), the numerous volunteers and the staff on site as well as the amazing organization by Golf Valley, the players didn’t miss anything. Airport and hotel shuttle, round-the-clock care as well as an excellent catering by the team of the golf restaurant Esszimmer Valley.

The managing director Evelyn März-Weichselgartner speaks of a complete success. "Since January, we have been working on this success. The effort for the organization has been well worth it, if you get these many good feedbacks. "

Everyone is looking forward to a repeat event next year with the slogan "Make your future count now" at the third German Futures 2019 in Golf Valley! 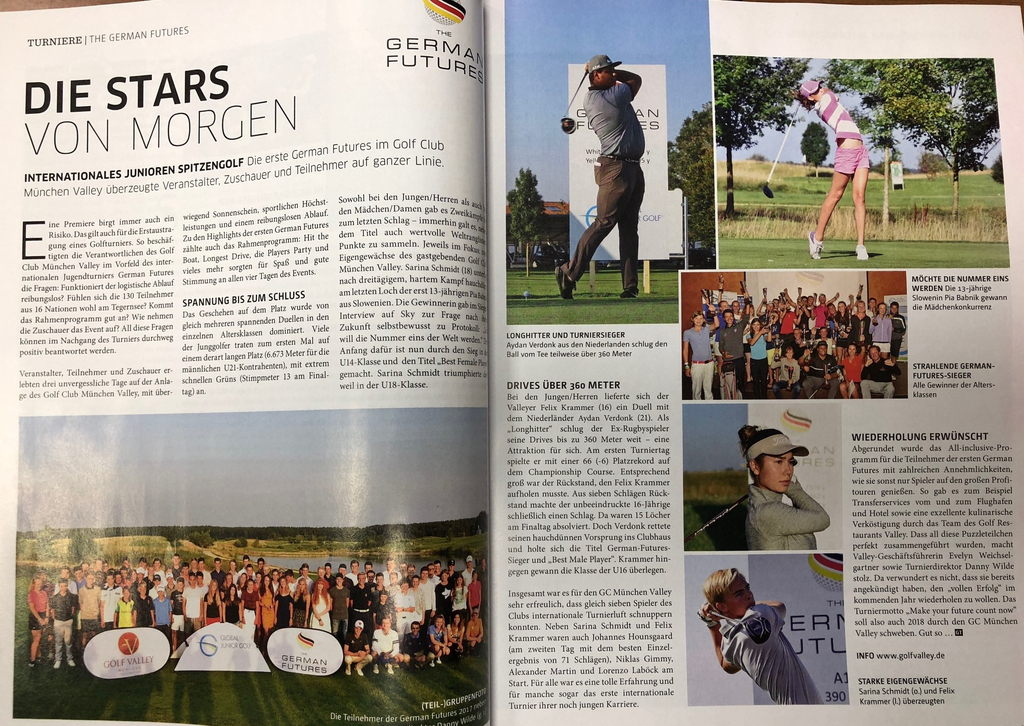 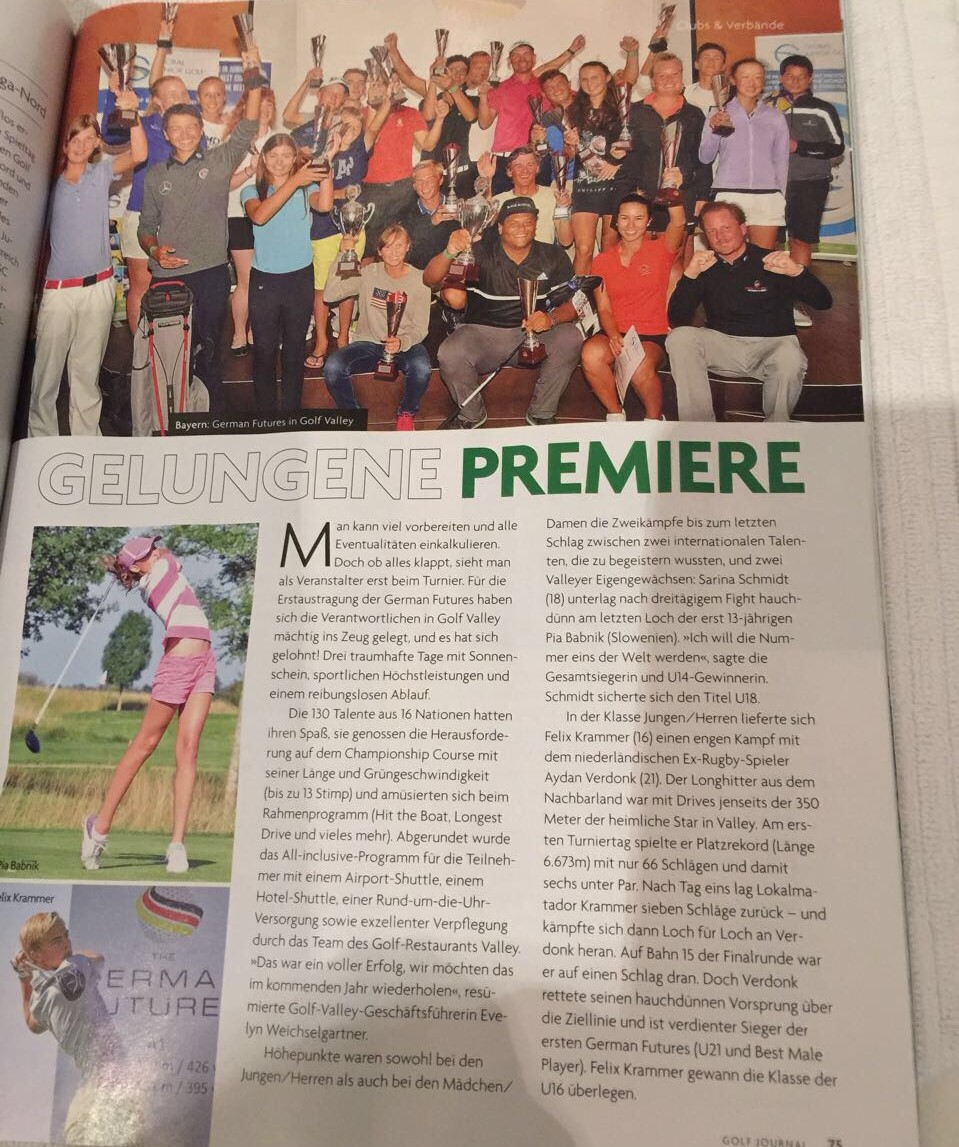 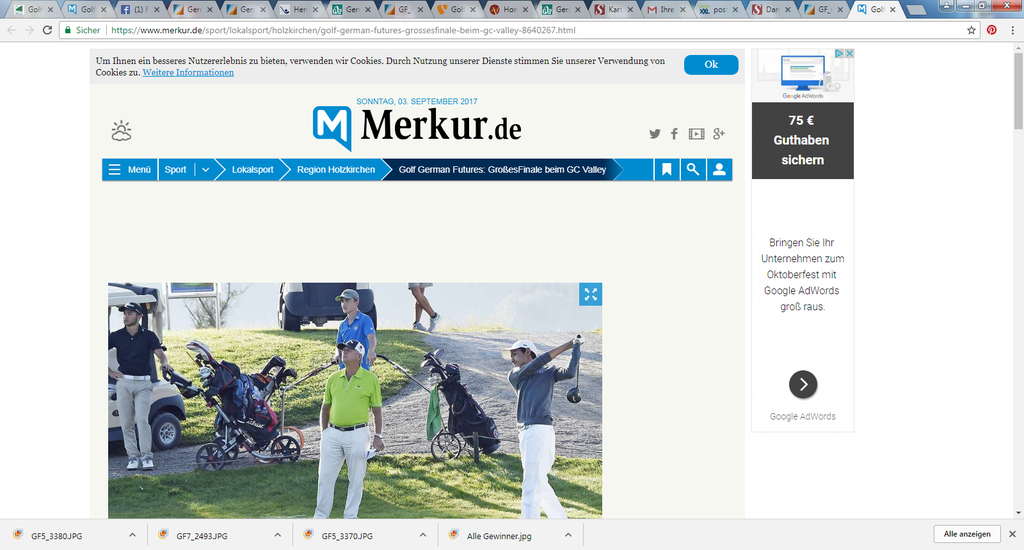 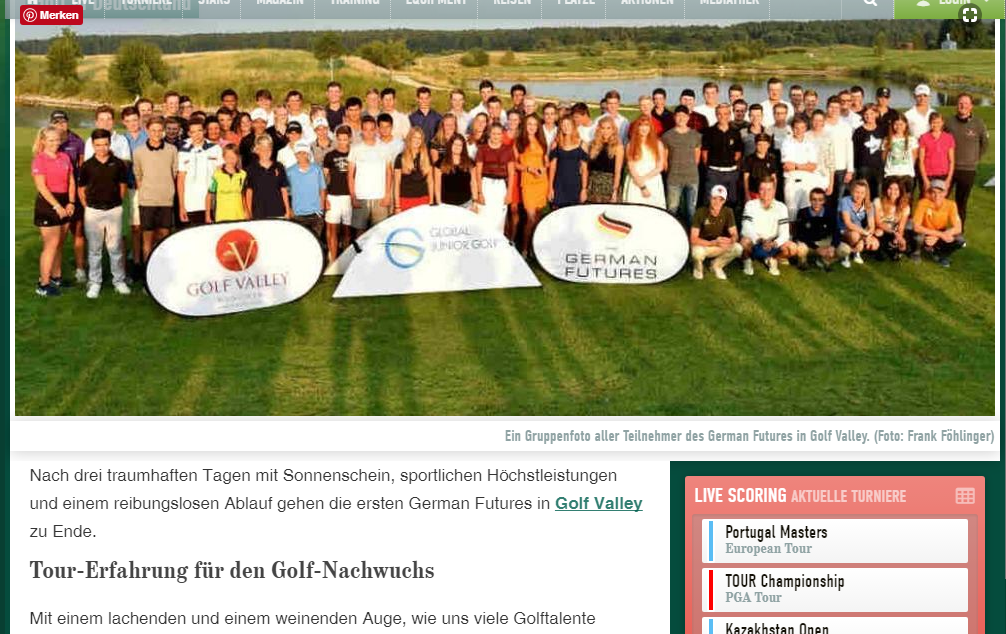 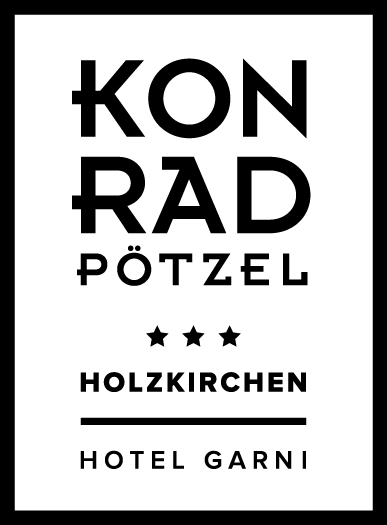 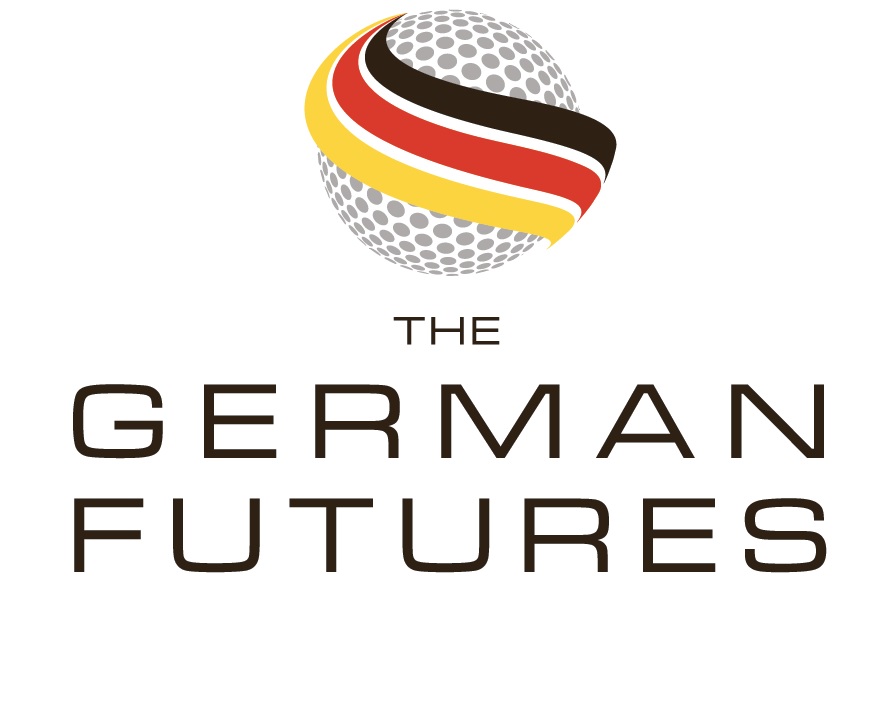 With our Golf Valley newsletter you are always up-to-date and personally informed. Subscribe to our free newsletter now.
Subscribe 